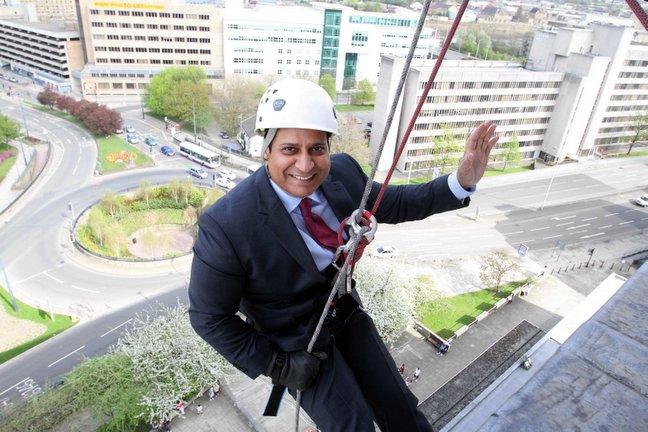 More than 60 brave volunteers abseiled 30 metres from the top of Bradford Central Library at the weekend to raise money for the Lord Mayor’s Appeal.

Among those taking part in the challenge, held in aid of the Nell Bank outdoor centre in Ilkley, was Deputy Lord Mayor Councillor Mohammed Jamil.

He said: “Every penny will go towards a very good cause. I am very pleased to be taking part and if I get the chance to do it again I will do.” Also braving the descent from the ninth floor of the building was nine-year-old Zaynah Khan, of Heaton, who is registered blind.

Her mother Nazmeen Khan said: “She loves the adrenaline rush. She’s been to Nell Bank with her school which was why she wanted to take part.”

The money raised will go towards a new adventure playground at Nell Bank, which is visited by around 20,000 children each year. Centre manager Bruce Fowler, who also took part in the abseil, said: “We are humbled by the fantastic response from the community.”

Is this Labour Council doing enough to tackle drugs & Crime?